by: Ali Tamlit from Resist + Renew. Ali is one of the trainers of the Organising for Power Programme. He has facilitated sessions on our residential training and other on-line training/workshops for our programme participants.

Back in February this year we held our week long residential for Organising For Power. We brought together a wide range of people from 10 groups fighting for migrant justice in Glasgow, Edinburgh and the surrounding areas. The course looked at a variety of things from how to plan a campaign, how to build your organisation and exploring group dynamics within your organisations.

For me it’s that last part that is often a crucial one. We can have the best plans, tactics and strategies, but if we don’t look after each other while we work together, things will fall apart sooner or later – and I’ve been part of plenty of groups where this has been the case!

There are all kinds of models and tools to help us understand group dynamics, and one of my favourites is called Mainstreams and Margins, which comes from the US based collective – Training For Change. It’s a pretty simple model which explains that all groups – no matter the size – have a culture and within that culture some things (identities, behaviours and beliefs) are seen as ‘good’ or ‘normal’, and others are seen as ‘bad’ or ‘unwelcome’. Often these things aren’t explicit and therefore if you’re in the mainstream you don’t really know that this culture exists. If you are in the margins, however, the experience can be very obvious and at times uncomfortable. 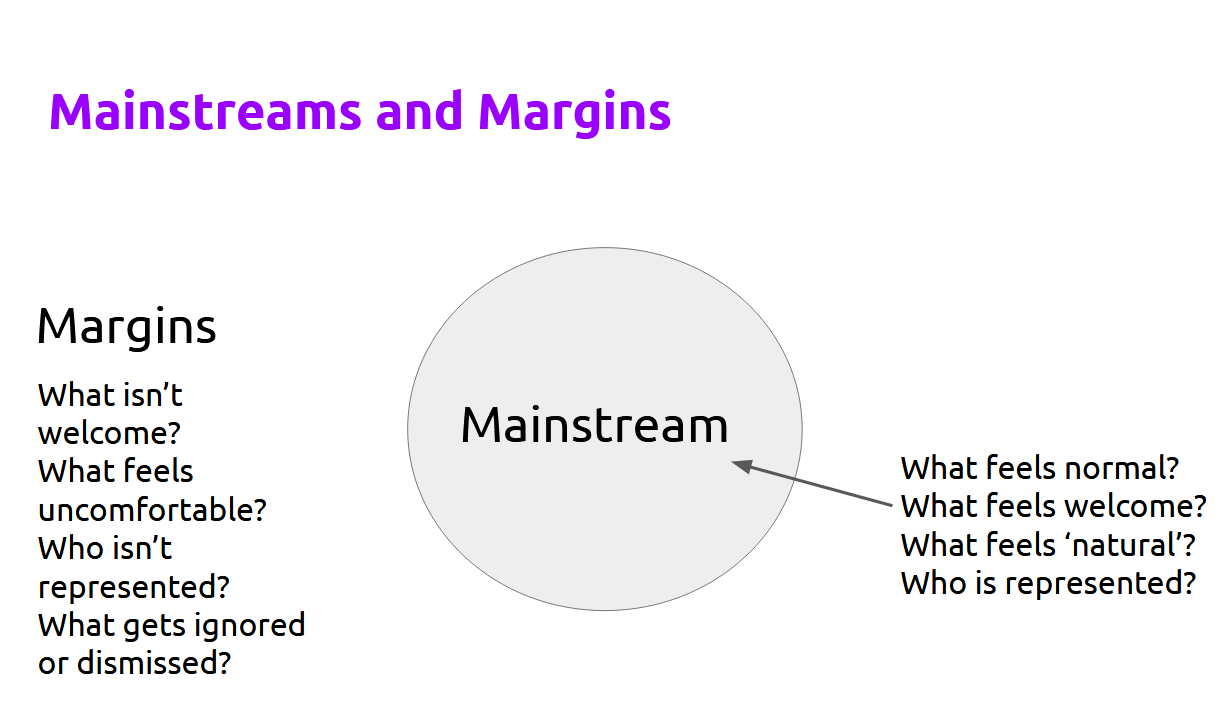 A great thing about this model is that it can visibilise a lot of things that are hidden to some people within a group and then help the group figure out what they want to do to welcome more from the margins.

At this point there can be a couple of ways to look at making the culture work better for the margins. One perspective could be something like: ‘us people in the mainstream are privileged and should welcome the margins more and use our power to do so. It’s the right thing to do!’. Whilst this perspective is technically true – it assumes a power dynamic that is a bit charitable. Those in power should help the less fortunate – because it makes them ‘good people’.

On our course back in February – I saw this take place in a number of ways. One of the most obvious is the childcare that was available. Childcare is often something that gets mentioned in discussions of group inclusion, because without it parents can find it hard to engage in groups. In our case there were 13 kids from 10 parents. Without the childcare option, some of these people wouldn’t have been able to make it to the course and would have missed out.

But it doesn’t stop there. The rest of the group would have also missed out – because we’re all learning from each other – we would have had fewer ideas and perspectives in the room. So we’d have all been worse off without them. Not only this but having childcare at the course completely changed the atmosphere for everyone. I’ve been on plenty of ‘activist’ courses and people are mostly serious for the first few days, there can be arguments and maybe people will start playing games together just before we go home. On our course there were kids running around, screaming, laughing and coming to hug people in the sessions (remember when we could hug people!) – and the atmosphere for everyone else felt a lot lighter than I had experienced on any other course.

So yes – childcare helped some of the margins – parents were able to take part. But if we think about inclusivity in this way, it feels like work and something the mainstreams ‘should’ do.

If we look at things from a solidarity perspective though – there were so many benefits, many of which we couldn’t predict beforehand – it’s less of a ‘should’ and more of a ‘let’s see how many benefits can come from this!’. And that feels more exciting and powerful to me.